Sandiaga Uno, the Tourism and Creative Economy Minister, Indonesia, has requested the people to help them in promoting their local attractions. This would support in the development of village tourism in the country.

The major drop in the official currency of Thailand – baht, to its weakest in five years may be coming to end as this South East Asian country attracts visitors back once again. As a result, the central bank moves slowly toward increasing rates.

Spain is all prepared to decrease trying to manage tourism in the right way and curb those mistakes that make daily life even more complicated for every Spaniard living in the country.

In Fiji, hotels are and more losing on skilled and efficient workers from the overseas.

At least 22 people were found dead at a nightclub in East London, South Africa, early Sunday morning, though their cause of death remains unknown, according to the report. The bodies of the deceased, found draped across tables and chairs at the club, did not bear marks of any visible injuries, local media reported.

The recent race for space tourism by Virgin Galactic, Blue Origin and SpaceX with several rocket launches is causing a bad effect on climate and increasingly contributing to global warming, according to a study.

Hollywood has become a popular destination on Florida’s east coast. This downtown is not lined with palm trees, but it has glistening beaches and an exciting nightlife worthy of any Hollywood star.

The Korea Tourism Organisation (KTO) in Vietnam held an event on June 22 to set up connections with Vietnamese travel management agencies and businesses to promote the growth of MICE (Meetings, Incentives, Conventions, and Exhibitions) tourism after COVID-19 is put under control.

There are several alternatives to Airbnb which are become adept for short and big vacations. The factors like booking, availability and expanse are better covered in many of these alternatives. 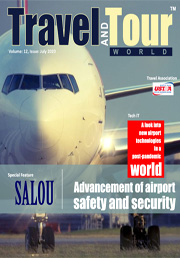